Orthobiologics: How does this work?

Orthobiologics: How does this work?
Posted on: 04 September, 2020

Orthobiologics: What does this mean? How does it work exactly? How does tissue re-grow? Magic?

Patients often ask, "What are these procedures and how do they work?" Orthobiologic procedures use substances naturally occurring in the body to accelerate repair of tissue. As scientists increase their understanding of how the body heals on a cellular level, physicians are using this knowledge to enhance the healing process, essentially tricking the body into accelerated healing. Research examining the complex function of cellular health and tissue regeneration is extensive, particularly the behavior of platelets, stem cells, immune system cells, and natural growth factors in the blood. The use of orthobiologics for the treatment of musculoskeletal conditions is an emerging field with evidence of its success accelerating rapidly.

Understanding of the multiple functions of stem cells and their role in tissue repair is still developing. We do know that their presence is key in stimulating the body's natural repair system by inducing the proliferation of cells. This happens several different ways:

MSCs are able to migrate and seed specifically into sites of damaged tissue where they can differentiate into functional cells.

How tissue is formed: synthesis of protein... where the magic takes place!

The formation of protein molecules begins in the nucleus of the cell with deoxyribonucleic acid (DNA), the instruction manual that makes you uniquely you. Through the cellular process called "protein synthesis," protein molecules are created to become the building blocks for new tissue. The process of reading your genetic code and translating it into new protein molecules is called "gene expression. " 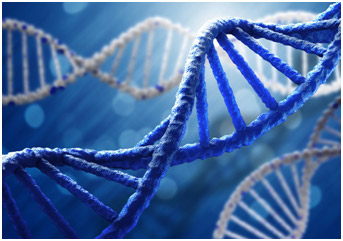 DNA is composed of two chains that coil around each other to form a double helix joined by the nucleobases adenine, guanine, thymine, and cytosine. It is divided into segments called chromosomes and further into shorter units called genes that carry genetic instructions. The DNA of one human cell stretched out is about 6 feet long and the DNA of all your cells combined would measure about 10 billion miles when stretched out (i.e., the distance from the earth to the sun 61 times).

The genetic information is carried in the nucleobases in specific sequences. As the DNA molecule unzips, the now single-strand snippets of the DNA pair with ribonucleic acid (RNA) that carry the same sequence of nucleobases, except for thymine which is replaced in RNA with uracil. In this way, tiny RNA molecules transcribe the genetic code contained in DNA, each gene carrying a specific nucleotide sequence encoded for a specific protein. DNA has now made a functioning copy of itself. Messenger RNA (mRNA), now carries this genetic code from the nucleus into the cytoplasm where it will begin the process of building molecules for new tissue.

DNA is the instruction manual in this process while RNA is the worker, and the work begins in the cytoplasm of the cell as mRNA searches for and pairs with ribosomes living in the cytoplasm. Ribosomes are the factories that produce protein molecules. 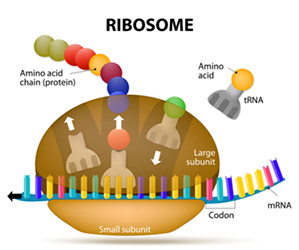 Ribosomes function like little factories assembling the proteins. Depending on the protein production level of a particular cell, ribosomes may number in the millions. Ribosomes are organelles within the cell that consist of RNA and 20 different amino acids for production of thousands of different proteins. Each amino acid forms a different type of protein and is responsible for its assembly. Scientists have only recently discovered that RNA molecules can be broken down into smaller units called microRNA (miRNA) that are specific to different types of proteins. It is through the presence of these microunits that scientists discovered similarities between human regeneration and that of a salamander. Read more.

In the cytoplasm, transfer RNA(tRNA) uses the protein sequence to attract matching amino acids living in the cytoplasm. Ribosomal RNA (rRNA) uses this same snippet of code to connect this sequence with amino acids in the ribosomes. Strands of RNA chug through the ribosome, combining amino acid molecules one by one. rRNA links together the amino acids to form a chain, like a chain of beads, a process called "elongation." This ends the translation process and the polypeptide chain is released. At this stage, the transfer of genetic information is complete. Read more.

There are 20,000 to over 100,000 unique types of proteins within a typical human cell. Why so many? Proteins are the workhorses of the cell. Each expertly performs a specific task. Some are structural, lending stiffness and rigidity to muscle cells or long thin neurons, for example. Others bind to specific molecules and shuttle them to new locations, and still others catalyze reactions that allow cells to divide and grow. This wealth of diversity and specificity in function is made possible by a seemingly simple property of proteins: they fold. - Science in the News. February 28, 2010

Proteins are the key to growth and maintenance of tissue. In fact, the name comes from the Greek word protas, meaning "of primary importance." The body contains 20 amino acids, forming thousands of different proteins in our body. Collagen, the structural protein of bones, ligaments, cartilage and skin, is the most abundant protein in the body. Proteins have many functions, including the creation of structure that is developed through folding. Folding gives the protein its particular conformation determined by the amino acids contained in the chain. The structure of each protein molecule is related to its function. As part of the magic that is cell regeneration, proteins will fold and refold throughout their life span.

Formation of the actual protein molecule begins as the ribosome gathers available amino acids to link them together in chains. A chain of 3 amino acids are needed to form a protein molecule. Long chains of amino acids called polypeptides then go through a process called "folding" that occurs when the protein emerges from the ribosome. This process gives the molecule a 3-dimensional shape. Read more.  Folding is a complex and potentially problematic process in biological health. Read more

Learn more about protein folding by the Amoeba Sisters, a clever series of YouTube videos by a former high school biology teacher and her sister who creates the videos. And, they are from Texas! Learn more. 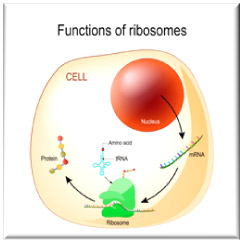 Understanding the cellular process of protein synthesis gives us insight into how orthobiologic procedures, such as PRP and Stem Cell Therapy, can enhance healing. Stem cells have the potential to develop into multiple types of cells, functioning as a repair system for the body. However, differentiation into functioning cells is just one of the many roles they play in healing. Mesenchymal stem cells are the team captain of the complex process of cellular regeneration and healing. They coordinate an extensive variety of cells that make up the body's emergency response team, each with their various responsibilities in the healing process.

Innate healing and procedures that enhance this process are achieving medical results that were previously considered inconceivable. They present an entirely new paradigm in medical treatment. The possibilities are endless and the potential fascinating.
﻿
X